Over 100 people joined a Mothers Day paddle for Mother Earth in front of Kinder Morgan’s Burnaby tanker terminal. The event, a protection ceremony led by members of the T’sleil Waututh First Nation, was joined by Pacific Islanders on a two week tour from Canada’s tar sands to the west coast.

"We were honoured to host the Pacific Climate Warriors to our territory. Our work to protect the water connects us all,” said Rueben George of the Tsleil-Waututh Sacred Trust Initiative. Hearing about how climate change impacts indigenous people on Pacific islands, like Fiji and Samoa, was an important reminder for everyone of how far and wide the consequences of projects like the Kinder Morgan pipeline can be felt.”

“Climate change affects us in numerous ways from cyclones to sea level rise to salt intrusion to the security of our food,” said Raedena Savea, one of the Pacific Climate Warriors from Samoa. “We're the first to disappear if fossil fuel expansion projects like the Kinder Morgan pipeline proceed.” 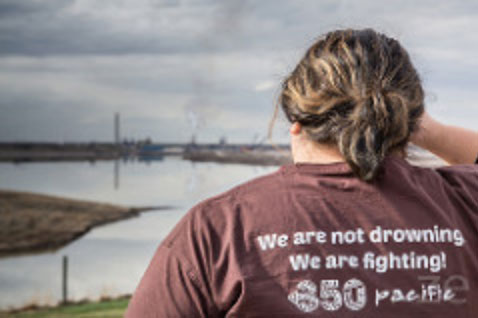 Before travelling to BC, the Pacific Warriors spent time in Alberta, visiting the tar sands in person and then speaking in Edmonton.

“When the fight against the Dakota Access Pipeline rose up in Standing Rock, Indigenous peoples from all around the world stood up in support, Kinder Morgan isn’t being built yet, but already that same kind of unity is emerging,” explained Clayton Thomas-Muller, 350.org’s Stop-it-at-the-Source campaigner. “The impacts of projects like Kinder Morgan are connected around the world, and now, so is the resistance.”

Before the event, the Pacific Warriors sent an invitation to Prime Minister Justin Trudeau to meet with them. Despite nearly 5000 people sending messages of support for the invitation, he has yet to respond.

“Mr. Trudeau was a champion for the 1.5ºC target pushed by Pacific Islanders in Paris, but since then he’s approved Kinder Morgan, just the kind of project that make it impossible for Canada to keep their climate promises – we want to know why,” Koreti Tiumalu, 350.org’s Pacific Regional Coordinator explained. “That’s why we invited him to meet with us.”

The Pacific Climate Warriors will speak at an event in Vancouver on Tuesday, May 17th premiering a short documentary about their time in Canada.

A collection of our truths as a people at the frontlines of climate change. These are our stories of how we are bearing witness to climate impacts as well as holding strong to the resilient spirits of our people.

Are you a business focused on the South Pacific? Become a member of SPTO.